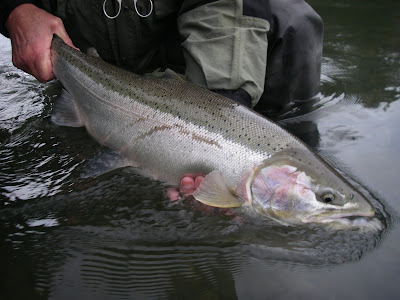 By the time you read this we’ll be on the road headed toward the northwestern most tip of the Lower 48.  “We” consists of yours truly and my wee lad, Schpanky, and the road we’ll be on is the one that leads to Forks, WA. We go not in quest of vampires, but to seek out the majestic wild steelhead of the Olympic Peninsula (the OP). Like the one pictured above, caught recently by Old Man River, of Chucking Line and Chasing Tail fame.

For an unaccomplished steelhead fisherman, this trip to the Mecca of lower 48 steelhead fishing is both exciting and daunting at the same time. First, let’s examine the excitement factor: You see, being a lifelong resident of the state of Warshington, I’ve never been to Forks. I’ve been close, but never actually to the town of Forks, and I’ve never fished for steelhead on the OP.  Schpanky has never been steelhead fishing, per se, period.  The boy is now 17, and as with most kids that age he’s rather busy. In fact, so busy is he during the prime months of winter steelhead fishing that there is hardly a weekend available from November through February to go out and chase the great anadromous rainbow trouts of winter.  Being on the high school wrestling team means weekend tournaments begin right about the time the fish start moving into the rivers, and the season concludes about the time the Washington Dept. of Fish & Wildlife decides to shut down the local rivers. So I booked us this trip months ago, knowing that we had one opportunity to get out and fish the waters of the Promised Land before the rivers close in April.  My winter steelhead season was a complete bust this year.  La Niña (The Bitch) brought with her incessant rains that swelled our local rivers multiple times during the months of December and January. When I did have a day available to go fishing, the rivers were not in good shape.  Around here, rivers closed before February began, so the result was zero fish hooked. So yeah, we’re kinda excited about this trip.  At least I am.

Now on to the daunting aspect of this trip: pressure and unpredictability.  The OP rivers are rain forest rivers, and not just by some stretch of the imagination: it’s an actual rain forest. It rains a LOT out there. Like upwards of 120 inches per year. Seattle is known for it’s rain, but the Jet City actually only gets about 52 inches of measurable precipitation annually. Do the math: The OP gets more than twice the rain that Seattle does. Don’t quote me on it, but I believe Forks and the surrounding OP may be the wettest location in the Lower 48, with only Yukatat, AK and Hilo, HA being wetter places in the non-contiguous United States.  In other words, we’re taking our Gortex. That same precipitation that grows massive, moss-cloaked cedar trees also causes OP rivers to blow out quickly, and within the past week the Hoh River, which typically fishes well around 2500 CFS, spiked to nearly 10,000 CFS.  I know many folks who canceled long-standing trips to fish out there last week. I felt bad for them, and felt relieved that our trip was not scheduled for one week earlier. When you book a trip to fish for steelhead in the wettest location in the lower 48 during late winter, you close your eyes and roll the dice.  Knock on wood, things are looking favorable for us at the time of this writing. If the rain remains moderate, the rivers should be able to handle it. It is imperative that we encounter prime conditions. We HAVE to catch a fish. At least one. There is great pressure to do so. The forecast calls for showers and light rain. Not rain, but showers and light rain. We can work with that, I hope. Fingers remain crossed–there’s a lot riding on this trip.

You see, Schpanky has followed me on many trout fishing excursions over the years, and while he has caught some fish, we’ve encountered way too many “less than stellar” days on the water.  I’ve always reminded him that there’s more to fishing than catching fish (which is always met with a blank stare). I impart upon him the vast wisdom that an angler has to get on the water as much as possible in order to maximize their chances of having that one great day—of catching that one great fish.  Well, it hasn’t worked out that well for the lad.  In fact, a year ago I planned a Yakima River trip during his Spring Break that was canceled due to broken Spring weather. By the time we were able to reschedule the trip it didn’t live up to anticipations. In fact, it didn’t even come close: the boy was sick, the river was rising and a weather system was moving in. With increased atmospheric pressure, the fishing shut down and neither of us touched a fish all day.  Too many days like that will sour a young, occasional angler.

If I can hold out the slightest glimmer of hope that the boy will maintain even a slight interest in fly fishing with his old man in future years, that hope lies on the success of this trip. We’ll be fishing with my buddy Joe Willauer, who guides for Jeff Brazda during the late winter/early spring months on the OP, before returning home Montana for a summer of guiding the heralded waters around Twin Bridges. 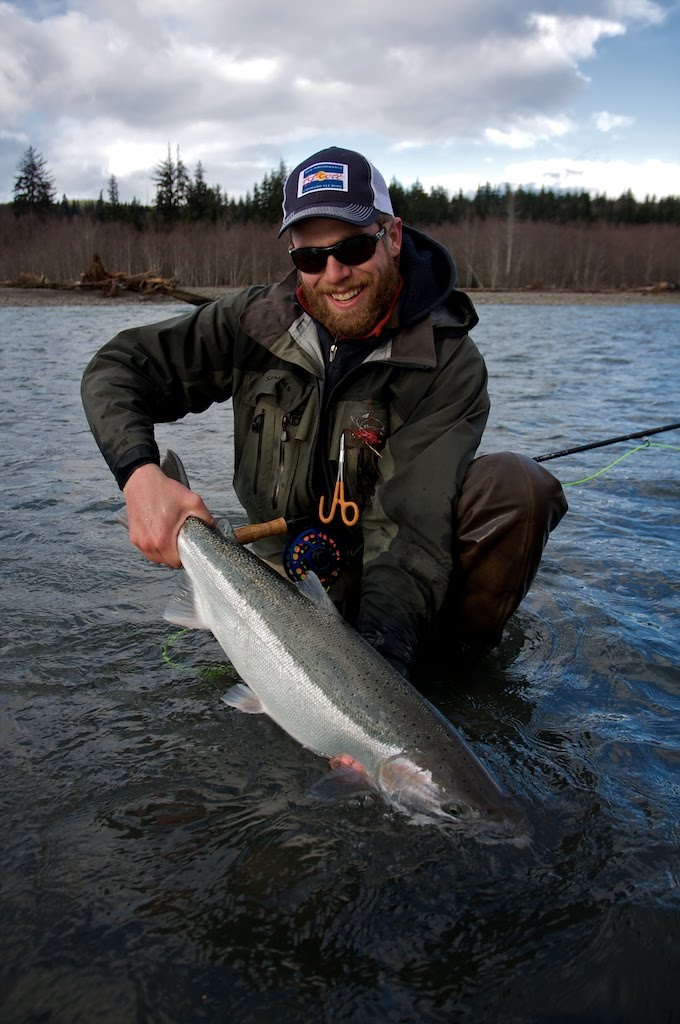 Joe with a recent haircut and respectable OP fish

And so, with Spey rods (and one meat stick) stowed along with our rain gear, Schpanky and The Unaccomplished Angler are about to meet the rivers of the OP. It is my hope that Schpanky hooks into a 35 inch, dime bright slab still dripping with Pacific Ocean salt…and that the fish runs downstream like a locomotive, dragging the lad behind as he sprints over the river rocks like a spazz, chortling like a schoolgirl (or maybe that’ll just be me in pursuit).

Joe, are you reading this?  There’s a lot riding on this trip (including guide gratuities).  Please see that the boy hooks into some wild OP chrome.  I don’t care so much if I do, but the boy MUST catch a fish. The future depends on it.